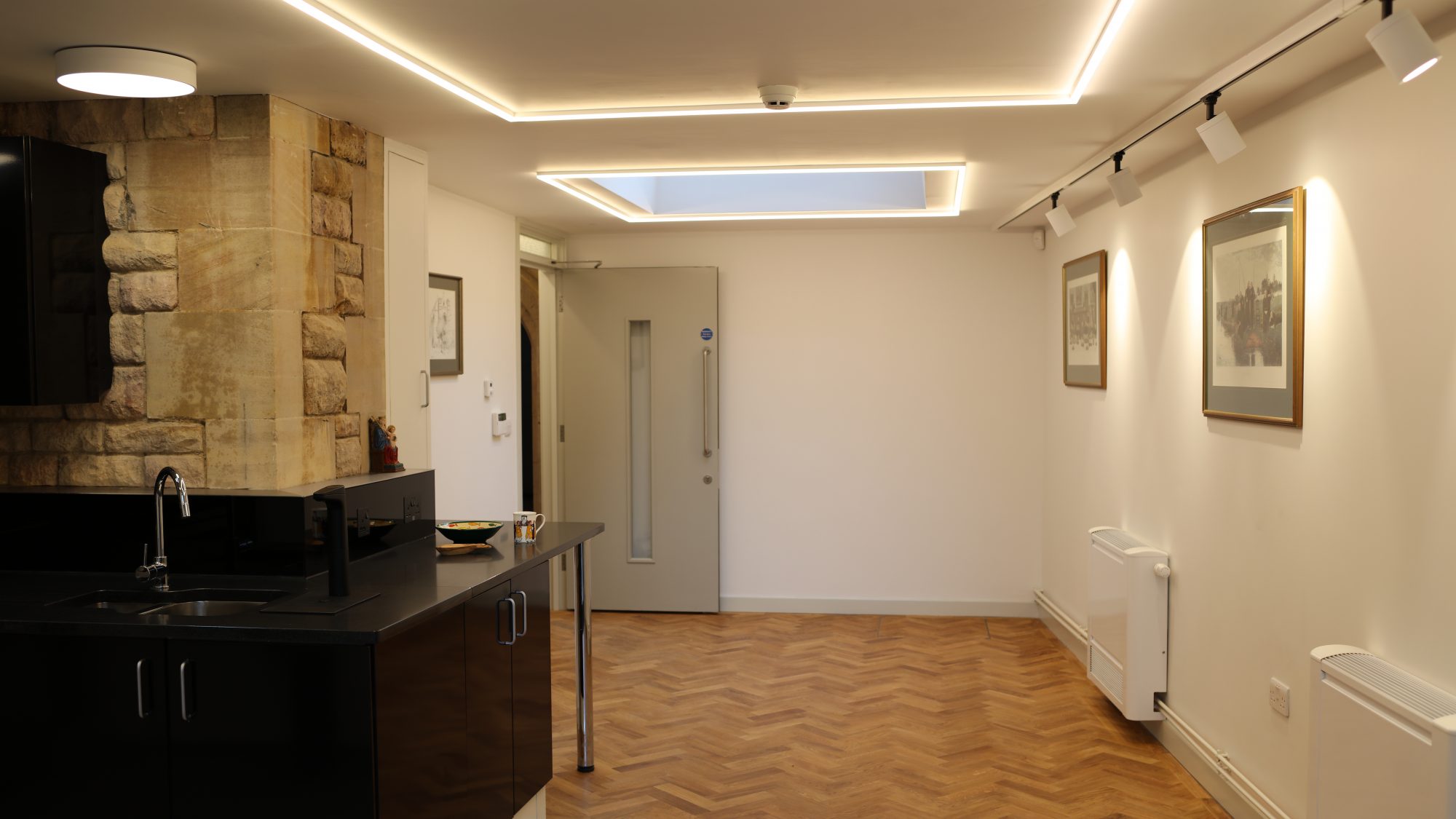 After a disastrous  ‘portaloo’  hire outside the west end of the church for a concert brought relations with the neighbourhood to breaking-point, the church was keen to see through a long-needed project for providing high quality accessible facilities in an up-to-date energy-efficient structure.

Whilst a 1970s re-ordering in the undercroft of this 1889-1901 church by James Brooks brought WCs, a kitchen and meeting room, current accessibility standards, a growing schedule of concerts, events and recordings precipitated the need for new work at ground level to provide a small kitchen and permanent WCs to end their reliance on hire facilities.

After a long project history, the proposed scheme for a single story annex had to be simplified after tenders came in over the budget. The resultant scheme provides a compact building — South Court — which belies the complexity required to fit the essential amenities into an intricately-shaped site.

What was formerly an overgrown wasteland has been transformed into a courtyard garden — bound by a new bespoke screen which references details from the historic ironmongery on the west doors — providing a transition between the revitalised churchyard and South Court. Now, the broken slabs outside the west door that had been used for parking once have been transformed into a spacious landscaped churchyard —  linking the restored war memorial with a gentle incline to the courtyard and South Court, and includes views into the church through newly installed glass doors.

Entering from the south aisle of the church through an existing door, the parquet-floored main body of the church melds into the oiled engineered-wood parquet floor finish of the annexe which unites the two spaces. Skylights and LED strip lighting play and accentuate the juxtaposition of the crisp new finishes against the cleaned coursed Ancaster rubblestone which has been left exposed.

The challenge of detailing internal abutments within the extension to the south wall of the church (which was left exposed) were overcome by carefully scribed boards which were used to form a ‘shadow gap’. Likewise, pattress boards were required to float cupboards, mirrors, and fixtures off the coursed rubblestone walls.

The primary functions of the annexe — the WCs and kitchen — are delightfully contrasting. The former — carved out of the available space — could have felt claustrophobic, but were instead transformed into bright, cheerful spaces by a mosaic of coloured wall tiles. The latter combines a monochromatic palate of blacks and greys featuring steel cupboards, a sleek black granite worksurface, and a glass upstand with stainless steel top let into the rubblestone wall.

Whilst small and discreet, South Court not only transformed the internal facilities of the church, but also regenerated the west end of the church. Paradoxically, what could have become a very inward-looking annexe has made the church more outward-looking as a whole.